Sophie and I have been “going back to Cali” at least once a year every year for the last three years now. We drive around in rented cars (I say “we” but it is always Sophie driving since I don’t have a license/would be a terror on the roads) listening to the small amount of CDs we have bought in Amoeba records (packing is always too tight to bring from home);  Jason Isbell’s Southeastern, Tom Petty’s Greatest Hits, Gregory Alan Isakov’s This Empty Northern Hemisphere, The Great Adventures of Slick Rick, and Life After Death by Notorious B.I.G. Each album suits a different mood, and Life After Death is the album you turn up to 20 on the way to get burgers at 2 in the morning. Stick disc 2 in and skip to track 3 so you can listen to Biggie and Lil Kim cussing each other out before you get to track 4; Going back to Cali.

When I first heard Big rap about Fatburger and Roscoes in ‘Going back to Cali’  they were formless references to me, I didn’t even know they were the names of places let alone places I could eat in. When they stopped becoming formless references and became instead, views from the passenger seat window a genius idea sprouted in my mind, or a vaguely good and waistband increasing idea at least. I would attempt to live out the lyrics of ‘Going back to Cali’. It wasn’t physically possible for me to do everything that Biggie raps about in that song, I lack the anatomy to “bust on bitches belly, rub it in they tummy”, nobody wants to pay me “5 G’s a show date”, and I just plain didn’t fancy “sipping on booze in the house of blues”.  This isn’t a comprehensive guide to everything I did, since I did manage to “spend about a week on Venice beach” (I met a rabbi who claimed to have magical powers and wanted me to be the muse for his new brand of bottled water) and “sippin crist-o with some freaks from frisco” wasn’t entirely achieved but I did have some fizzy wine with a mental case who was visiting for a weekend from San Francisco, but presented here are the highlights.

“Smoke some nice sess in the West”

Being the square that I am, I have never smoked a cigarette or a joint or even a hookah. For the sake of this article though I tried a medicinal cannabis-infused brownie for the first time last Summer, with my friend Chris (a seasoned stoner) to guide me through the experience. I went to Chris’ apartment in studio city and we split one of ‘Sexy Ed’s sexy edibles’; a fudge brownie.  It tasted like a normal chocolate brownie, only with sweat mixed in. I didn’t mind the taste. Chris shoved a bottle of milk in my face, “drink this, it makes it better”. I downed the contents of the bottle, paying no heed (as usual) to my lactose intolerance. It took a while for it to hit me, my earlobes got heavy first, then sound became layered like baklava, then I started to feel like I was trapped inside a snowglobe. Chris told me we should watch The Simpsons, or some other cartoon while we were high. He flicked through all the channels and couldn’t find any cartoons, so settled on a documentary about the plague, the fucking plague I kid you not. I lay, bloated from the milk and unable to move, like a dumb beached whale, on Chris’ black leather sofa. I tried to make my mouth work to say “turn it off, turn it off”, it wouldn’t happen, I tried to make my arms work to pick up the remote but this was also an impossible feat. The plague documentary finished and we watched one about Romans fighting to the death. The rest of the night passed slower than a tortoise that’s had a stroke. My bones became heavy, my thoughts were heavier, and my skin was stuck to the leather sofa. Weed made my mum funnier and more creative, my friends more chilled out and easy to amuse, but me, it just made me convinced I was cursed with super sonic hearing and was never going to be okay again.

(The selfie was taken before my arms stopped working, my face became a lot weirder as the night went on) 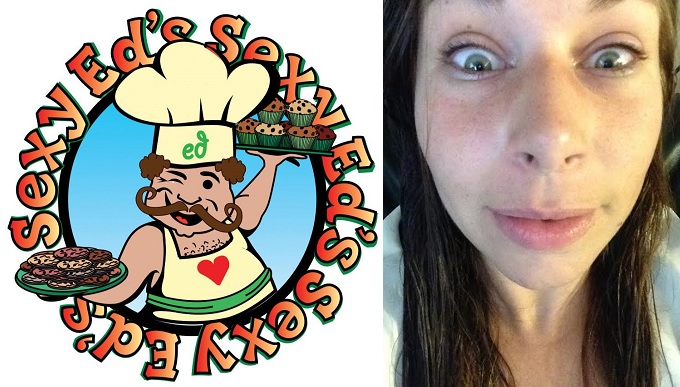 Roscoes house of Chicken and Waffles was founded in Long Beach, California by Harlem native Herb Hudson in 1975. We went on a weekday afternoon to the Roscoes on West Pico blvd.  I ordered the Number 9 – The Obama special (previously named ‘The Country Boy Special’, renamed after Barack Obama popped in on his way to a benefit and ordered number 9 to eat in his presidential limousine), which is wings with waffles and a side of syrup. Sophie ordered a monster of a dish, 1/2 a chicken smothered with gravy and onion, served with a side of grits and a fluffy hot biscuit. When this chicken was alive it must have been the size of a goddamned Emu, it must have been the Shaquille O Neal of the hen house. This delicious monstrosity was sat in an almighty puddle of grits with enough melted butter in them to clog the arteries of an elephant, next to a big and beautiful biscuit that could have staved off anyone’s hunger for a good few hours alone. It was amazing, but what was even more amazing was watching Sophie slowly but surely trying to work her way through it. She was defeated in the end and only managed to finish the meat itself. The puddle of grits stayed on the plate, they seemingly had the ability to replenish themselves and it didn’t matter how many spoonfuls the two of us ate there was still the same amount on the plate. I had to relieve her of the biscuit, I’m helpful like that. When I tried to reminisce with her about our Roscoes experience while writing this piece she said, “I was the fool of the whole restaurant remember”, still feeling defeated by the food. My meal was much less eventful, it was beautiful and fit for the leader of the free world, or the king of hip hop, or me. I look forward to going back in a few years time and ordering something that they can rename ‘The Crowder special’. 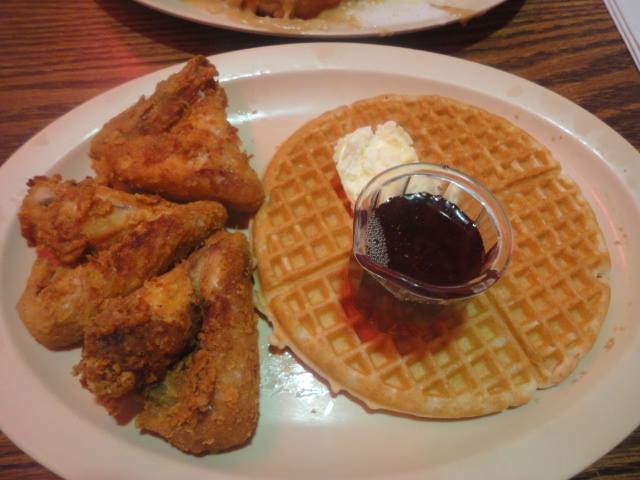 “If I wanna squirt her take her to Fatburger”

Fatburger seemed to be the favourite burger joint for all the 90s rappers, east or west coast. “Two in the mornin got the Fatburger”  – Ice Cube in ‘Good Day’, “The club be poppin so I’m stoppin at the Fatburger” – 2pac in ‘Late Night’, “But I’m fly at Fatburger when I way out west”  – Beastie Boys in ‘The New Style.’ Lovie Yancey opened the first Fatburger restaurant in 1947 in South LA, originally named Mr Fatburger after her boyfriend. A year later, in 1948, Harry Snyder opened the In’n’out drive through hamburger stand in Baldwin Park, LA. It’s a massive worldwide franchise now, with plenty of celebrities having partnered with them to open up their own Fatburger’s, including Kanye West, Queen Latifah and Pharrell.

In’n’Out and Fatburger are like Blur and Oasis, or Bernie and Hilary, you have to pick one, pledge your allegiance and bore your opposition to death with the reasons why your choice is right and theirs is wrong. I choose fatburger, and not just because I love 90s hip hop, but because the burgers are bigger and juicier and better than the ones at In’n’Out; Sophie’s choice. Being the good friends that we are Sophie accompanies me when I go to fatburger and I her when she goes to in’n’out and though it may make me a traitor, once in a while it will cross my mind that if he wanted to ‘squirt her’ a double double and animal style fries may have done an adequate job too. 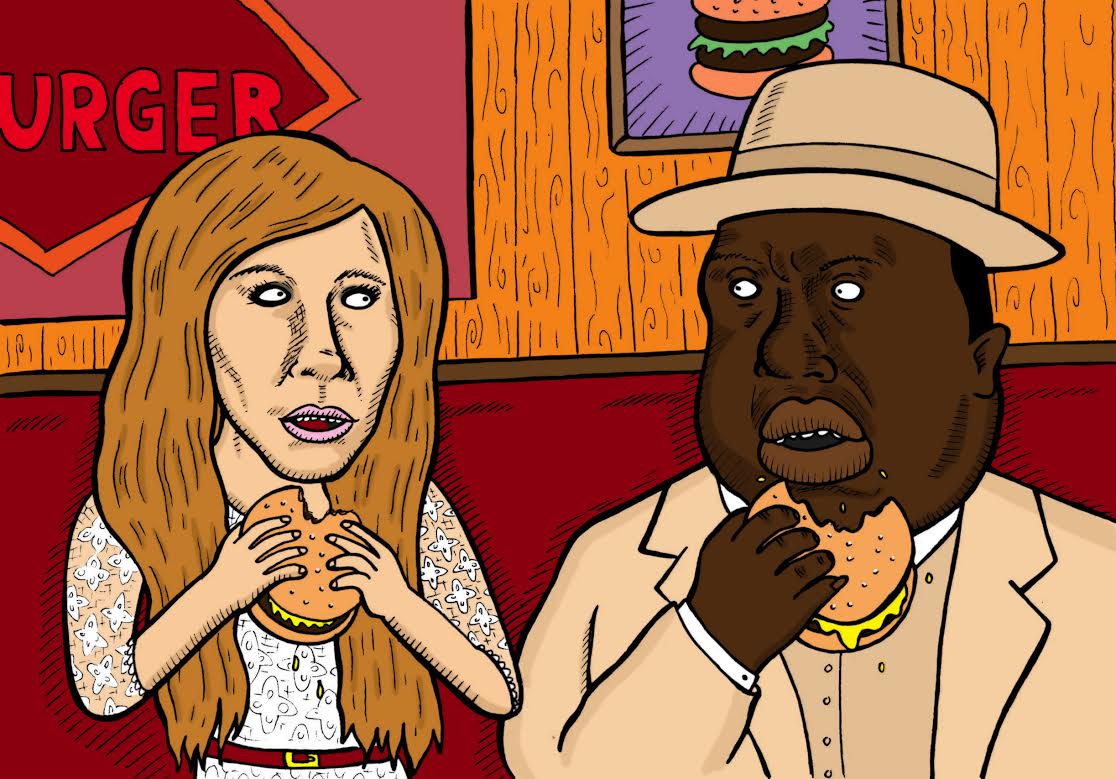