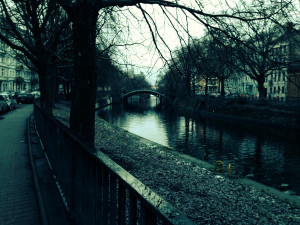 We went to Berlin to be great explorers, eat excellent food, take photos in the city’s many photoautomat machines and have productive meetings over coffees and dinners. It was freezing but it was magic, as discovering cities by foot always is. The only time I’ve ever been to Germany was on an art trip during secondary school so I couldn’t say anything in German that wasn’t preceded by extreme blushing or was anything more than a mutter. Sarah, on the other hand, after touring and past visits, flounced about in her rabbit fur hat being all cool, ordering everything for us and leading the way like a natural (thank god for her). Below are some snippets of the excellent places we discovered. 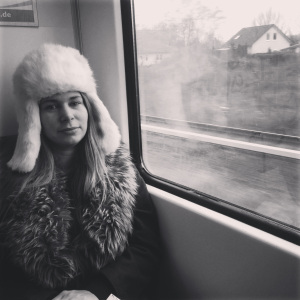 “I enjoy ham so much more now that I’ve hung out with pigs and know what idiots they are” – Sarah Crowder, Berlin 2015

Il Cassalore was our first port of call after getting settled at the apartment. We took the Ubahn to Kottstrabe and walked along the river to the little unassuming Italian restaurant on the corner of a residential street. 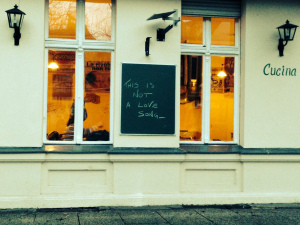 We were tired and hungry and the simplicity of delicious cheap pizzas and litres of red wine are the perfect combination for tired minds and hungry hearts. Sarah was still slightly valium-high from the flight so peppered the meal with all these slow, considered sentences of thoughts that had me giggling like a little kid over my perfectly over-sized pizza. 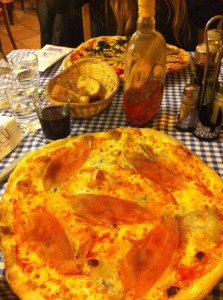 We had the Vegetariana with spinach, courgettes, aubergines and peppers and one that was sheeted in Proscuitto with mounds of blue cheese hiding under bubblin’ mozzarella, swapping plates precariously over the table half way through.The beauty of Italian food is that it can kill stone dead any feelings of unease or apprehension. It zaps your fighting spirit and paired with too much wine, leaves you in a beautiful fuzzy stupor. I felt a mixture of after-sex and after-dentist kind of vulnerability that I had to spread myself over two chairs and wrap myself in my scarf to pull myself together. It’s a kind of delicate but satisfied happiness that gets you all weak and makes your limbs feel like boiled rhubarb.We deliberated over which dessert to get and ended up getting a bit of each. Profiterole, tiramisu, panna cota and creme caramel. This might sound extreme but writing about it now has genuinely just made me feel flimsy like I’ve just hit my funny bone…and my toes are tingling. I got to eat most of the creme caramel because Sarah was too concerned with the profiterole. It looked like a big scoop of milk chocolate ice cream and she said it was so good that it felt improper to be in public eating it. After paying the wonderfully cheap cheque and Sarah had rubbed chilli oil on her lips to plump them up, we half assed some photoautomat photos at the station and walked home in a satisfied daze. 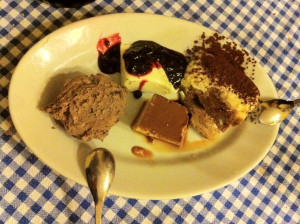 Honestly, when you find yourself overcome with lust but with no one to lay it on, just take yourself to an Italian restaurant (preferably Il Cassalore if you find yourself in Berlin). The results are pretty much the same but with less bullshit and the only thing you’ll have to put in your mouth is a delicious slice of pizza. 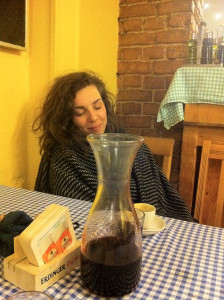 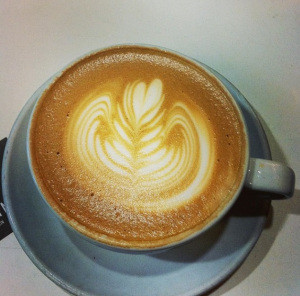 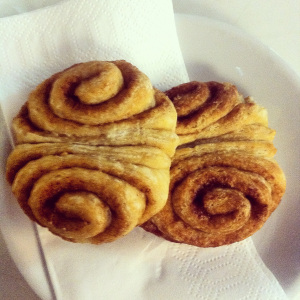 Coffee coffee coffee coffee coffee. I’ve become one of those people that can’t be a person before a cup of coffee in the morning. This morning was one of those mornings but luckily The Barn has the biggest cups of coffee made pretty by cute German boys and these little Franzbrotchen cinnamon things and custard tarts and croissants filled with ham and cheese and oh look, all of a sudden you’re having the best morning you could possibly have. 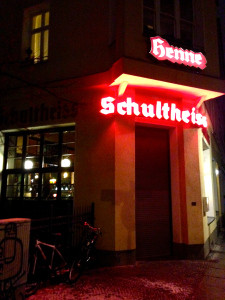 I love chicken. I love nandos and chicken wings and roast chicken dinners. I love fried chicken and chicken schnitzels and the flat iron chicken at Soho House that puts me into a meditative state any time it’s layed in front of me. I thought I would never taste a chicken as good as the brick flattened holy grail of poultry at Little Fork in Hollywood but then I did. At Henne. Where you have to go without knives and the burns you get as you tear into that crispy, salty, fried chicken skin hurt your greasy fingertips oh so damn good. Like war wounds of a delicious kind. Like showing off a gross hickey to your friends at school after a lusty night of teenage fumbling.

We arrived at Henne at 6pm before the shutters had even opened. I was due to fly in a few hours so we hit the early bird special, conveniently, as the place seems to be fully booked most of the time. It’s charming and dark and the kind of place you want to sit for hours and get drunk and people watch.It’s been open since 1908 with black and white photographs all over the walls of patrons of the past. If these walls could talk…they’d probably have to fight through a whole bunch of chicken grease and smoke-stained wallpaper (that has aged this place so perfectly) before telling some pretty fine stories of times gone by, I’d imagine.Their menu is straight to the point. Milk fried chicken with a slice of bread, served with either potato salad (which was more a bowl of mayonnaise with a dash of potato) or Sauerkraut. Sarah’s friend Carlo turned up halfway through the meal and convinced me to chew through the bones which up until now I’d never dared do but was the best piece of advice I’d ever taken. They just seemed to crumble away at first crunch. I felt like I’d gained another rung on the dedicated carnivore ladder.Chicken gets a shitty rap of not being interesting enough, both to eat and to cook but I think that’s complete bullshit and if you subscribe to that we probably shouldn’t hang out. I’m not saying the chicken at Henne will be the best chicken I ever try. I know there’s probably a little guy waddling through some straw right this second ready to take the number one spot on my chicken chart but my burnt finger tips are a badge of honour and I will wear them with pride. Now, to the airport…