Sophie: Sarah and I went to Frank Turner’s show at 93 Feet East last night. It’s not often that we get to hang out and go to shows together in London because we live so far apart but if it’s something we’ve deemed extra special, we’ll usually be there (Any excuse to meet up, eat food and have a sleepover). We decided that this was one of the special ones because not only would we get to see Frank, who we both hadn’t seen play in ages, but we also got to see Esme Patterson who is over in the UK playing a few shows this week.

Esme is from Colorado and has an album coming out on Xtra Mile Recordings called Woman to Woman, featuring a set of tracks from the perspective of women in famous songs. It is excellent throughout and gives voices to women like Dolly Parton’s Jolene, The Beach Boys’ Caroline and Michael Jackson’s Billie Jean. We were introduced to her music by her manager Chris, a friend of ours in Los Angeles. He always plays us songs really loudly in his car which we very quickly become obsessed with and make him burn onto cd’s for us. Last summer was Jason Isbell’s SouthEastern. This summer was Woman to Woman and Shakey Grave’s album that had us losing our voices during every car journey we took.

The show was great. If you haven’t heard or seen Esme play, do so immediately. She’s like an angel…but a really cool angel who looks badass with a guitar and has a face that you kind of just have to fall in love with the second you look at it. She sings both sweetly and totally raw at exactly the right moments taking these women from one dimensional, voiceless characters to fully rounded, passionate and opinionated women. And she makes them believable. So much so, that I might have accidentally called Townes Van Zandt a total moron when I re-listened to Loretta after hearing Tumbleweed. I’ll never do it again because I love Townes Van Zandt more than anything in the world…but he was a bit of a moron that one time right? 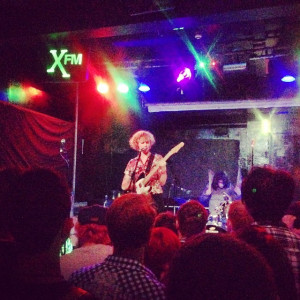 We’d spent a good portion of the last few months in Los Angeles listening to these songs so Sarah and I were most excited for all the people in the crowd who were potentially getting to hear them for the first time. There was one kid next to me paying absolutely no attention and throwing shots of sambuca all over the place who I wanted to shake and shout ‘YOU’RE MISSING IT, YOU IDIOT’ but I figured he was a lost cause and probably wasn’t old enough to understand important things anyway. Overall, however, everyone really seemed to dig it. Of course. (For a full stream of her album, check out her recent Guardian article.) 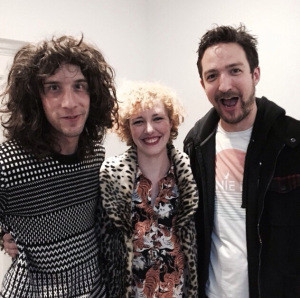 This show would be Frank’s 1632nd show.  The last time I saw Frank play was at the Wheelbarrow, a tiny pub in Camden, with my Swedish friend Emelie a few years ago. I don’t think it matters whether he’s playing a bar, a pub or to 12,000 people at Wembley Arena, he always manages to create the same super infectious energy and feeling of camaraderie between every single person in a venue. I’ve always worded the feeling I get from listening to him as wanting to go out and start some kind of revolution somewhere. I probably could, if I really wanted to because I think that’s how everyone else feels when they watch him. Or they’re just super drunk and love a really intense sing-a-long, who knows… 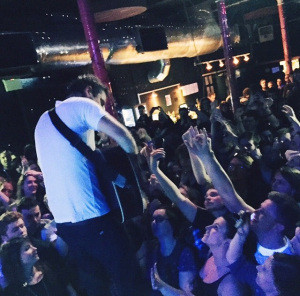 Sarah – in 2006 Sophie and I had not met yet but we ran in the same circles and I think we vaguely knew about each other. She was part of a jailbait DJ trio called The Whoremoans that played in clubs they weren’t legally old enough to drink in. I was working to earn the bare minimum I could survive on (mostly for friends club nights and sometimes by putting on my own nights), living in a roach infested room above Nambucca with my best friend and drinking far too much Strongbow. It was the Summer of 2006 that Frank started singing ‘The ballad of me and my friends‘ live. After last nights gig, which he ended with this song, Soph and I were discussing how there is no other song in the world that more perfectly captures that time in our lives. I am instantly transported back to drinking free red stripe at Frog while Gregory Nolan took photographs, that pasty poet smackhead Doherty doing secret surprise gigs at Nambucca, and feeling like our little scene was at the centre of the whole modern world.

I ended up touring with Frank a few years down the line, selling his merchandise. Him, his band (The Sleeping Souls) and the rest of the crew became like family to me (not that there is anything wrong with my own actual family). Spending the majority of every day for months on end with the same people for weeks or months in a confined space (van or tourbus) can only really go one of two ways; you end up loving or hating each other. Luckily I ended up loving each and every one of them, even Tarrant.

I’ve toured with other bands and singers but I have never come across the kind of fans that Frank has. Venues from Hull to Helsinki, from Los Angeles to London, packed full of people raising their skinny fists while shouting/singing every word to every song, no matter if the song is years old or hasn’t even been released yet. They’re the same fans who get his lyrics tattooed across their bodies, who would never dream of downloading his music instead of buying it and who hang around at the end of every gig to meet and talk to him because the way he makes the crowd feel when he’s on stage is that each and every one of them could be or already is his friend.