A Critical Overview of the Evolution of Dolly Parton’s Tits

A Critical Overview of the Evolution of Dolly Parton’s Tits from 1965-2015 and their Direct Relation to America’s Standing as a Dominant Global Superpower.

In this brief essay I will discuss the various ways in which Dolly Parton’s tits have evolved synchronous with America’s ever changing political and cultural landscape. I will, during this essay, draw upon the opinions of leading academics and intellectuals in the fields of anthropology, politics, street culture, and errr… tits, as well as expressing many of my own thoughts on the subject.

America in 1965 was strong and steadily growing in confidence. With the shock of the Kennedy assassination already two years behind them and with the arrival of the British music invasion led by The Beatles and The Rolling Stones, America had ushered in a new era of liberal, teenage proto-hippy politics. This fresh, new brand of politics practiced fervently by a new generation of young men and women in college campuses across the United Staes counterbalanced the support that the majority of the American people showed for the deployment of 3.500 ground troops in South Vietnam that same year. Dolly’s tits at this point signified everything that was wholesome about the American dream. They were big, bold and natural, pushed up high. Proud. Almost appearing to look skyward like the country’s other great symbol the American Eagle. Dolly’s tits at this time represented hope. Instead of looking for communists in every conceivable place, as one was encourage to do in the preceding McCarthy era, now one could look at Dolly’s tits and be proud. Look at what America has achieved! It’s all there! It’s all in the tits!

American Conservative author and commentator William F. Buckley Jr was compelled to note that: “The appreciation of Dolly’s tits in the mid to late sixties was immense and must surely be considered ‘A Movement’ of that time. Like McCarthyism, it was a movement around which men of good will and stern morality closed ranks.”

Author and Political Activist Norman Mailer’s views on Dolly’s tits is more leaning towards their role in inciting youth revolution. In particular the role they played in young America’s denouncement of the Vietnam war. “Dolly’s tits were a major player in the anti-Vietnam crusade. I’m sure that her tits were in many of the minds of the young men that burned their draft cards and marched on the Pentagon chanting ‘Tits! Tits! Tits!’ Some held placards with pictures of tits on them. You could almost feel that The Pentagon could be crushed by the sheer cultural weight of Dolly’s massive tits.”

As the decade ended and America entered the 70’s and the regretful era of the Nixon administration, Dolly’s tits would again change shape and come to be a symbol for a new embittered generation. Approaching the mid seventies Dolly’s tits still possessed much of the same vitality that they held in the sixties but they were, in a way, more reserved. Restrained. Tame. As such they shared a woeful commonality with an America coming to terms with a withering defeat from a war that many of the youth and left-wing political commentators had said since the war’s inception was un-winnable. Political commentator and Libertarian Socialist Noam Chomsky comments: “Dolly’s tits in the mid seventies mirrored the feelings of the American public. They were no longer effervescent and brash. They were often hidden underneath loose fitting western shirts or thick knit sweaters. They were basically in hiding. Like America burying it’s head in the sand after being sold a false dream by a corrupt leader. Dolly’s tits had become humbled.”

The late seventies saw Dolly’s tit’s stand proud again. Appearing perkier than they had been since their heyday in the sixties, they often made lively appearances on televised country music jamborees. Bobbling about with a renewed energy they were just like America finding it’s place within the world again. They also, around this time, began to serve as a beacon for civil rights practitioners and activists across the country and found their way into the feminist politics of female radicals. Radical Feminist Carol Hanisch expressed her views on Dolly’s tits in 1977 “Dolly’s tits were very liberating for women everywhere. They were a great shape but not considered aesthetically perfect. The way Dolly took ownership of the perceived flaws in her tits was inspiring” The late seventies and early eighties are said by many to be the golden age of Dolly’s tits as they served as an inspiring national treasure throughout this time. President Jimmy Carter famously had a picture of Dolly’s tits that he kept in his wallet that he, oddly, showed to his children at bedtimes. But the late eighties saw a significant change in Dolly’s tits as they were surgically enhanced to keep up with America’s ever-changing cultural landscape. Whereas in the past Dolly’s tit’s informed and inspired the culture of America they were now taking influence from America itself. The shape of Dolly’s tits had become more conical and pointed – perhaps a reaction to Americas fear of an upcoming Cold War – Dolly’s tit’s around this time seemed to take on the shape of the very weaponry that was being designed the threaten the Country that her tits had come to symbolise. American Diplomat and Political Scientist Henry Kissinger had this to say in 1987 “The ongoing threat of another cold war clearly has had an effect on Dolly’s tits. Both in shape and in prominence. They are no longer round and buxom but pointed and missile-like. They truly reflect America’s current sense of paranoia surrounding the Russian nuclear threat”.

Dolly’s tits drastically changed shape and form from 1989 onwards. In the early 90’s they had taken on a very round shape and were pushed down snuggly in tight fitting garments. During this time a gap developed between each tit (widely considered a subtle critique on America’s departure from the strong moral values of the Reagan administration.) and they had inflated to an unusually large size. This massive increase in tit size, it should be mentioned, coincided with a time when America thought it was invincible again. America felt bigger and better than ever but when race riots blighted 90’s America Dolly’s tits were sadly overlooked in providing any insights into why America was having such struggles within its ethnic communities and it would seem that throughout the entirety of the nineties Dolly’s tits were seen as a symbol of a bygone era and were no longer a vital part of American political culture. During Dolly’s tits “Hibernation period” in the nineties president Bill Clinton, wearing stained trousers, was called to reflect on them during one speech in 1998 and said: “America has had its struggles. But remember that no matter how low we get as a nation, Dolly’s tit’s will pick us back up and help this country soar again. God Bless America!”

But with the coming of the new millennium saw a new threat to American soil. Post 9/11 Dolly’s tits for several years were a shadow of their former years. Still massively oversized they represented Americas military strength but her tits were now angled downward slightly. Sagged if you will. Bowed in desperation. Searching for answers. They stayed this way for years as wars raged in the middle east and American troops were stationed in Afghanistan and Iraq. Dolly’s tits were no longer a symbol. Newer, fresher tits had popped up and had appeared on the scene. Dolly’s battle-scarred tits were too much for this post millennial America to take. There were new tits now. New obnoxious tits. Kardashian tits. And while in recent years Dolly’s tits have come to be revered as some sort of iconic relic they are still in the shadows. Like America. Flailing away blindly at unknown, hidden enemies.

Millionaire businessman and newly appointed Republican President Donald Trump hopes that Dolly’s tits can reclaim their place in the heart of America. “Dolly’s tits were great. Then they stopped being great for a bit. But hopefully, they can be great again! And so can America! The neglect the American people have shown Dolly Parton’s tits over the past twenty or so years is indicative America’s lost greatness. We neglect the things that made this country great in the first place! Like the freedom to shoot ethnic minorities in the back for stepping on your lawn and shit like that”.

Illustration and article by Chris Harward. Chris is a badass illustrator. Check out his work here 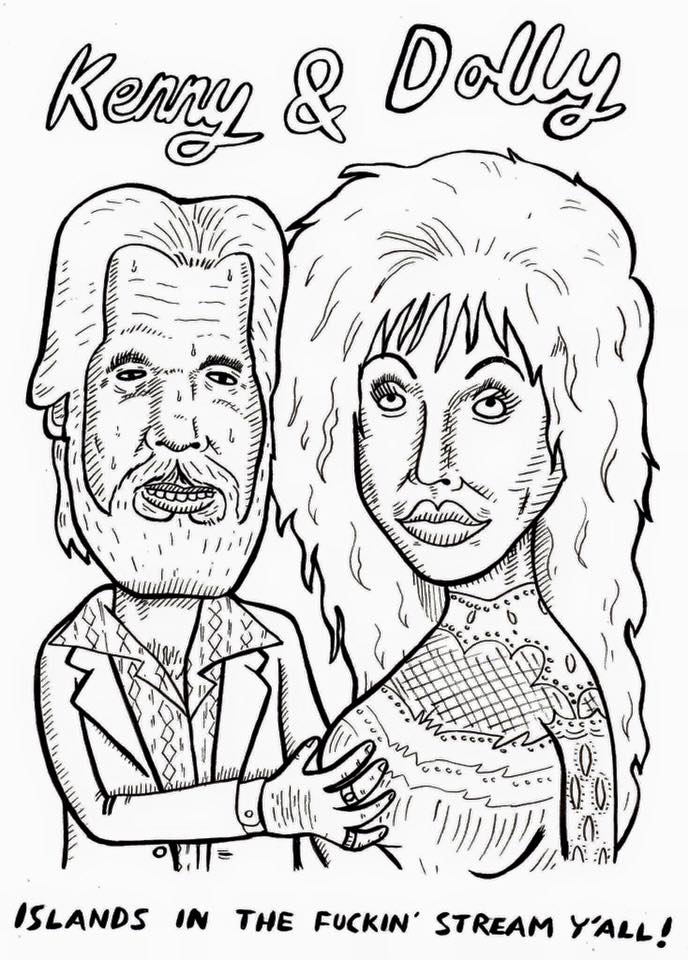