As I write this, I am balancing on a rock at the edge of a Montana forest. It’s around 2pm. The sun is strong here at this time of day. To avoid it, I have nestled into a formation of rocks which faces a large valley of trees, most of which are perished and dry as kindling, lying in criss-crossed graves on the forest floor. Pine beetles have had their way with the forest here, overthrowing the green and fecund mountain-sides and turning them into grey and skeletal ones.

But the beauty is still unrelenting. It is still quiet and calm, still green and rich down on the ranch, still brimming with dragonflies and butterflies that dance intrepidly around your feet as you walk through it all, still the promise of bears and deer and elk which is a thousand times more than I can say for back home in the city. Summer in Montana…There is nobody around apart from a friendly harem of flies and the occasional chipmunk that looks as if it has stepped right out of a Disney cartoon. I hear a myriad of birdsong but other than that, a rare and maddening rush of wind through the trees is my only adversity, arriving like a heavy sigh and leaving just as quickly. 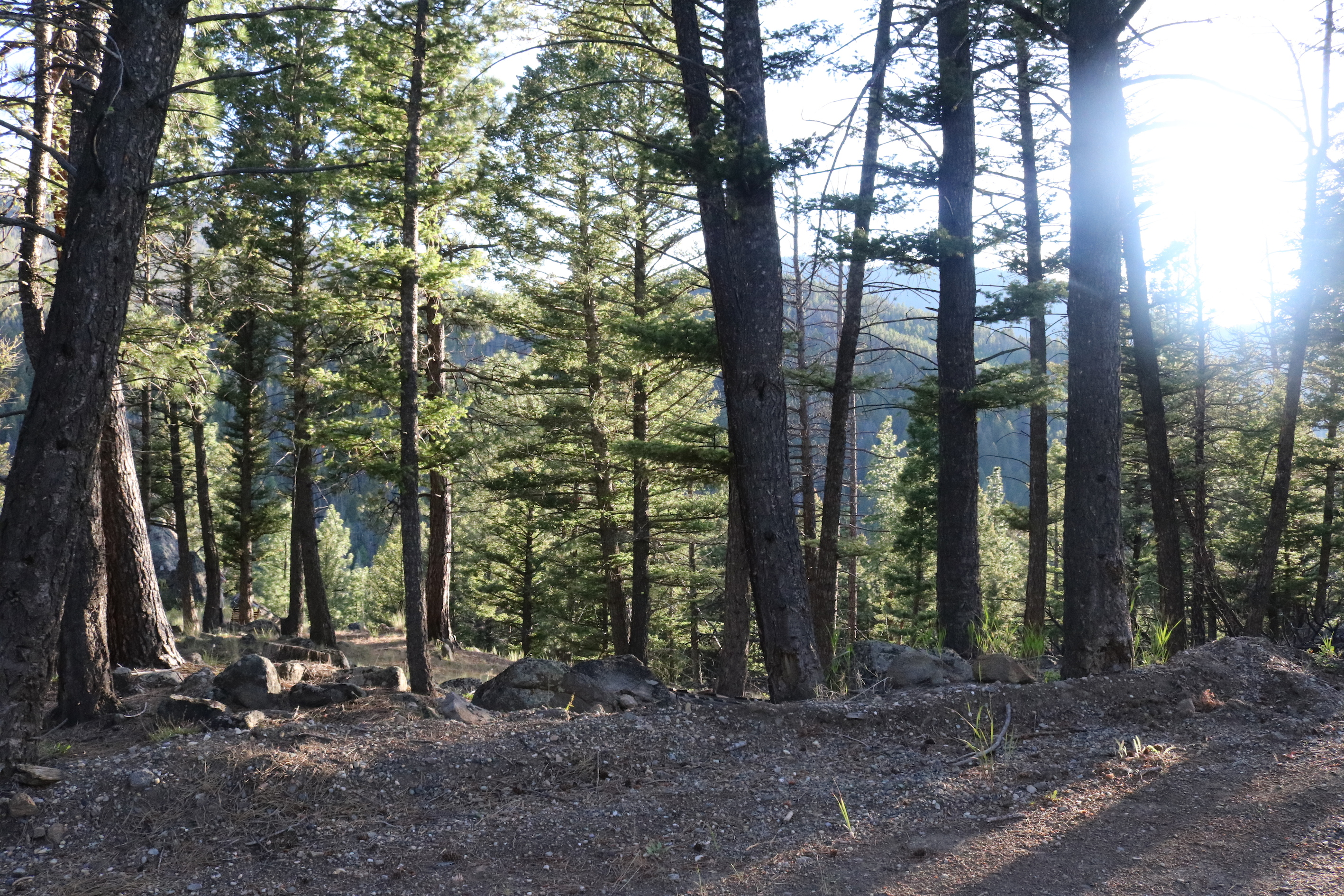 I haven’t had service on my phone for four days and although I am hardly on the last frontier out here on the ranch, as disconnection goes, I am pretty well into it. The world could all be going to shit out there (probably is) and I would have absolutely no idea about it. I am safe here among the trees, in my bubble of green, blue and gold. As long as a fire doesn’t ravage the inner sides of these mountains and force us all out on the one small road that leads from here, I could be quite content forever.

I have enjoyed that nobody can get hold of me. I don’t like being contactable one hundred percent of the time. I think it makes me anxious and angry and unable to be in a moment without thinking of another one somewhere else and I feel like that makes me a shitty person and a shittier friend. I am of a generation that is slap bang in the middle of it all, old enough to remember growing up without a smartphone in my hand but young enough to have let it seep into my existence quite naturally and irreversibly. Sometimes I think it would be easier to have only known one existence because trying to straddle both is a mentally conflicting endeavour. Nowadays if you falter for just a second in not responding to somebody when they decide they want to talk to you, there has to be a valid reason to warrant it. Most of the time, I just don’t feel like talking. And maybe I still won’t feel like talking next week and that should be totally fine. But we have become so used to instant satisfactions that trying to explain that to somebody is a fucking nightmare. So here I am, in the forest, with no means of contact for an extended period of time, for probably the first time in my adult life and although I am all for that, I’ve been super interested to see how it would play out. Here are some of the things I learnt. On this bedrock of animal faith, I take my stand. 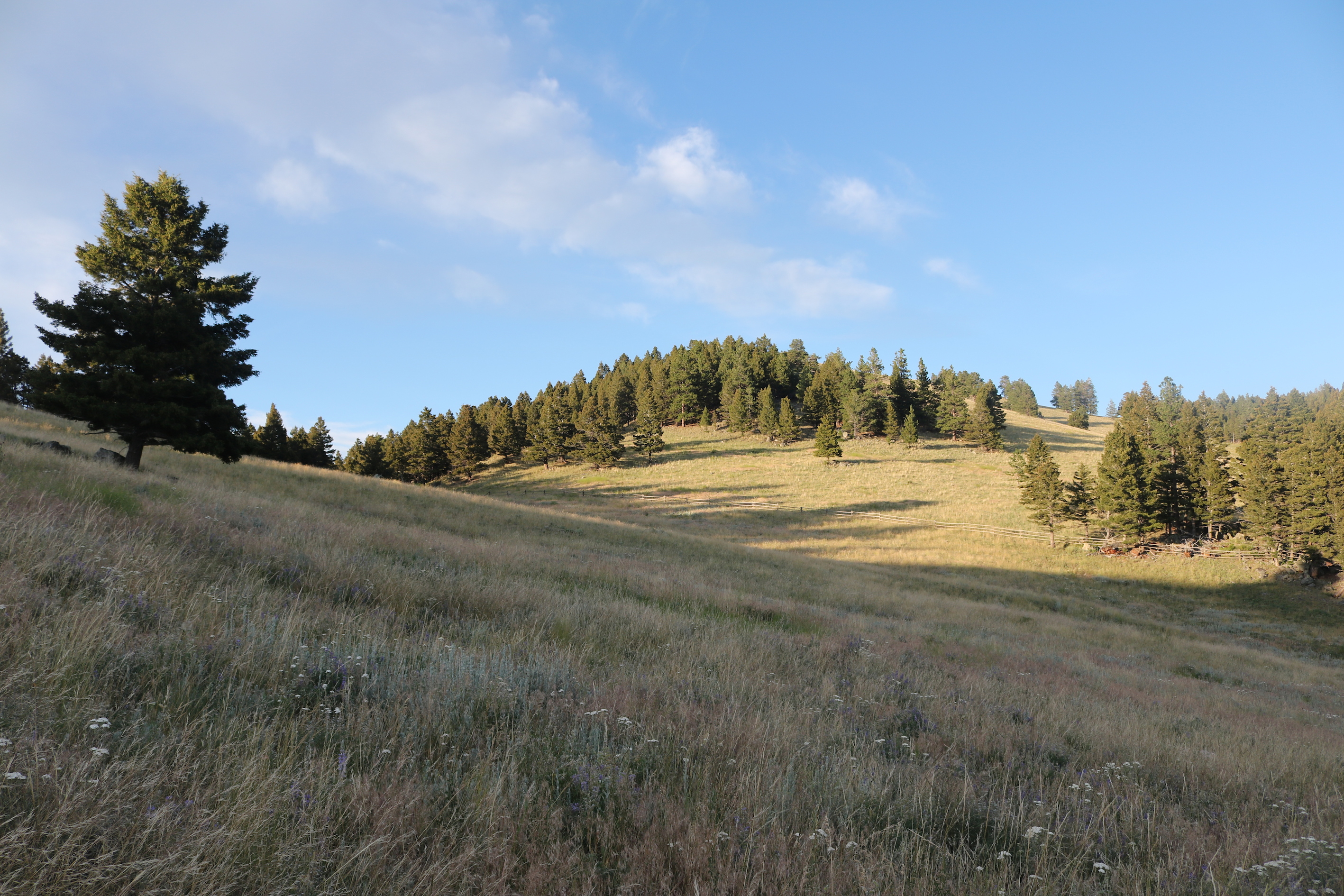 LIFE IS MORE FLUID. Day one and I felt excited and full of it. ‘It’ being absolutely everything that was good. I could feel the shit physically falling away the further I progressed into the day. I woke up in the morning and instead of grabbing for my phone as a way of waking me up and filling my soul with frenzied, useless information, I stared out the window  for a good six of seven minutes. A mule deer and its baby strolled past, stopped to graze a little on the grass outside my picture frame of the world and moved on. I could smell the wood of the cabin, I could hear the voices of people chatting over their breakfast a few hundred yards away in the next building. I felt tired but I really felt it. I wasn’t trying to intercept any of my physical or emotional feelings with anything else so the day felt more fluid than usual. I slipped from one moment to another rather effortlessly instead of pulsating in and out of opposing worlds. Being in a place like this makes a quiet fluidity like this much more accessible but it felt good, like I should practise this more often, like I could transfer this to the city at least for a little while.

YOU ARE NOT WHO YOU ARE ONLINE. Day two and I felt sad. I was alone in the world! Completely exposed! I took every opportunity to not be around anyone because I felt like I didn’t know how to be. The bullshit falling away is all good but it takes with it a lot of what you’ve unfortunately learnt to rely on in order to exist in the world. It’s like breaking up with somebody who has been dragging you backwards for so long but realising that you’ve kind of forgotten how to be a whole person without them. It feels like that without your online persona. You start to have to reassess whether you are interesting and exciting beyond the realms of your relationship or if you were only ever interesting and exciting because you stood together united, each making up for the others downfall. It forces you to be more present and not to rely on the notion that you are only relevant because you’ve done this or that because nobody actually gives a fuck. It’s far better to think ‘Well, I’m happy because I’m here and I’m engaged, present, inquisitive, able to listen and respond to the world around me in a way that is far more committed than it is with the incessant mind puncturing of a phone by my side’. Happy being the operative word. Luckily I have a good enough grip on reality (and myself) for this to have only affected me for a very short period of time. Today made me realise that it’s important to know at least a little bit of who you really are before you learn to not be you anymore.

CHOOSE REAL LIFE. Today I was elated.  A few people on the ranch were heading into town and I was going to go with them to reconnect, to see what I’d been missing in the world, to talk to my friends, to shove fifty thousand photos on Instagram of the sunset over the mountains, finally! But I was prevented from doing so by a call from the wild. Clint told me he was going fly fishing on the Little Blackfoot River instead and after a morning of internal conflict over which would give me the most long term nourishment, I chose to go with him. Clint is a brilliant writer and father to two of my favourite humans. We spent the journey there eating cookies, drinking coffee, talking about writing and the challenges that come with being greedy for life, interrupted only by brief gasps towards the landscape opening up around us. We pulled to the side of the road and after a brief lesson in casting the fly, climbed down into the river and waded for hours there on the Little Blackfoot. I’d never been  fishing and I wouldn’t have traded that day in for anything else in the world. I returned to the ranch feeling elated over having learnt some real things, not just from the river but from my companion on it….Choose real life every time.

BE YOUR OWN GOOGLE. Day four and I needed google. I am painfully aware of how little I really know without it. Of how many words are not in my vocabulary. That the plants and birds can’t tell me what they are. That I have to learn much much more about the world that I’m living in in order to really live in it. That terrifies me. But it has forced me to ask more questions and to interact with people, to engage in and appreciate mutually nourishing  exchanges rather than one sided ones. Feed and be fed. Keep asking questions. Or reading books. Relish the actual search for information over the instantenaous satisfaction of finding it out. I’m learning to be my own search engine. It takes longer but it’s a hell of a lot more rewarding. Generally, the internet cuts out the middle man but what you didn’t know is the middle man is actually a suuuuper cool dude with a whole bunch of knowledge and good stories. He’s where real life occurs, go hang out with him.

Reconnection was tough. I flew straight to Los Angeles and was so overwhelmed the first few days, I panicked and had like, three breakdowns. I’m being melodramatic but it’s also completely true, ask Sarah. Yet from just a short time away from my phone, I noticed how much easier I found it to talk to people, how much easier it was to listen to what they were saying without thinking of being somewhere else, how much easier it was to recognise the things that would keep my internal batteries charged and my willingness to say yes to them. I also found that I liked the things I was saying and thinking more and that those thoughts were more fully formed because of the space I had in my head to organise them. I’m trying to hold on to it but its tough. Perhaps I’ll peruse pictures of remote forest cabins on instagram for a few hours. Perhaps that will help…right?