Soaked to the skin by Leonard Cohen

The last time I saw Leonard Cohen perform live was in the square outside the Santa Croce church in Florence, Italy. It’s a small square, no more than 1000 people sitting on rickety white plastic chairs over cobbled stones. When you looked up, through the fairy lights strung across the buildings, you could see residents of the square on all sides silently grouping on their patios and balconies to watch the show. When you looked ahead you could see the lights from the Basilica shining upwards behind the unobstrusively constructed stage in front of the church. If he looked frail up there, in his old age, I wouldn’t have noticed. His voice, which grows deeper with age, rumbles so deeply through your bones that it could cast into shadow the tombs of Michelangelo and Galileo which lay mere feet behind him in the old Basilica.

I can’t remember what time of year it was but I want to say summer. The sleepy, still and perfectly warm kind. It was perhaps the most modest and beautiful concert I have ever seen by somebody of his greatness. If there was to be a perfect setting to enjoy the words and song of Leonard Cohen then this would be it.

Known as the poet laureate of pessimism, the godfather of gloom, the prince of the bummers, preconceived ideas of his music get in the way of explaining to some people the kind of beauty in a concert like the one I saw in Florence. As Leonard said himself, ‘I think of a pessimist as someone who is waiting for it to rain. And I feel soaked to the skin.’ This statement is everything when it comes to his music and lyrics. You are a fan of Leonard Cohen, first and foremost, if you are a fan of words. Then, I believe, you are a fan of Leonard Cohen because you are susceptible to being soaked to the skin by the things that you feel. Whether its melancholia or joy, elation or despair, there is an overwhelming beauty to be found and acknowledged in it all. For some people, that is absurd. Why get pelted by rain when you could just stay inside and let it pass, right? Fair play to them, those people are just doomed to never be Leonard Cohen fans.

But there are those of us who feel like it’s more heroic to stand outside and be defeated by the Gods from time to time. Sometimes it takes a force like Leonard Cohen to show you how necessary that is.

Rest In Peace, LC. Thank you for everything. 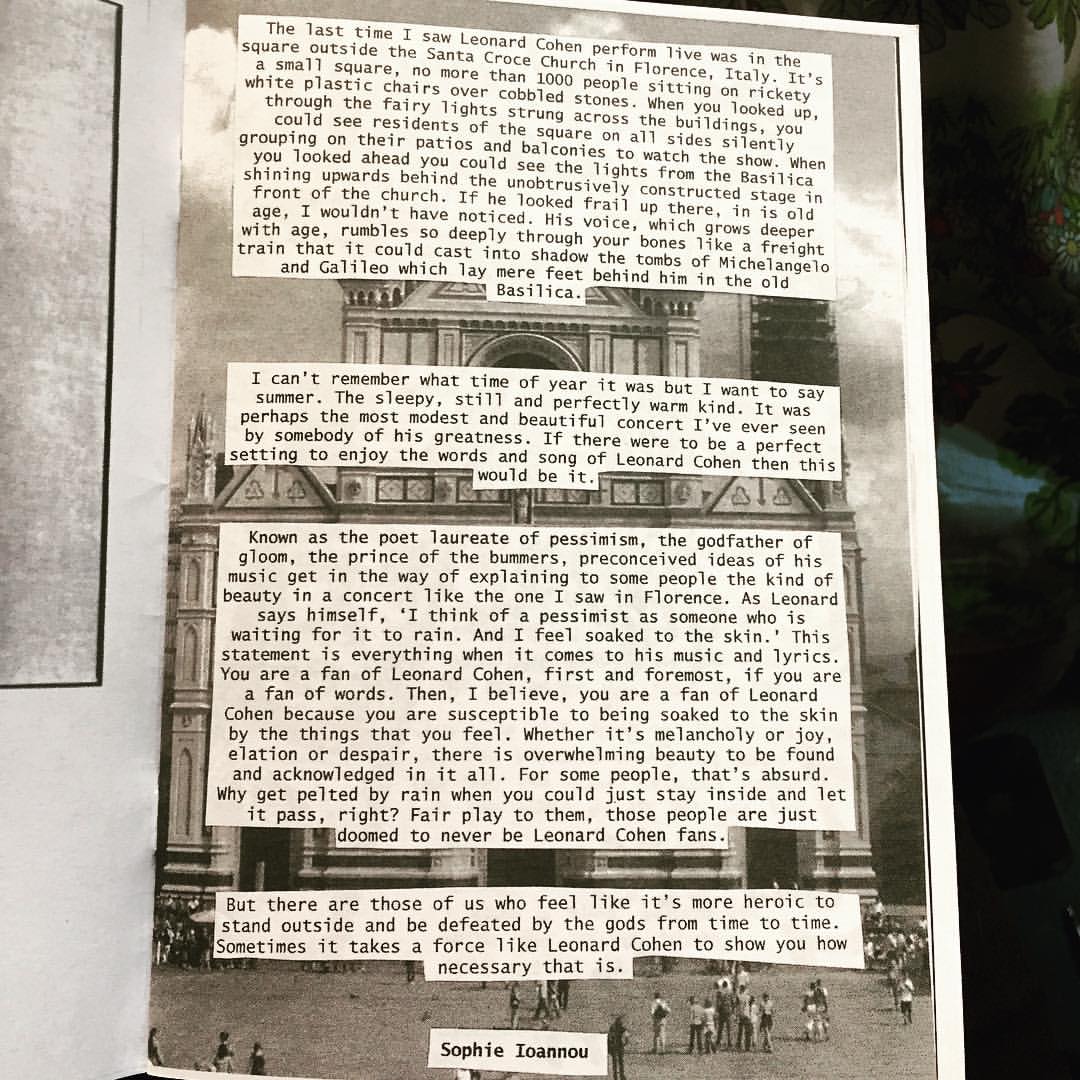