Inside the head of…Robbie Brindley 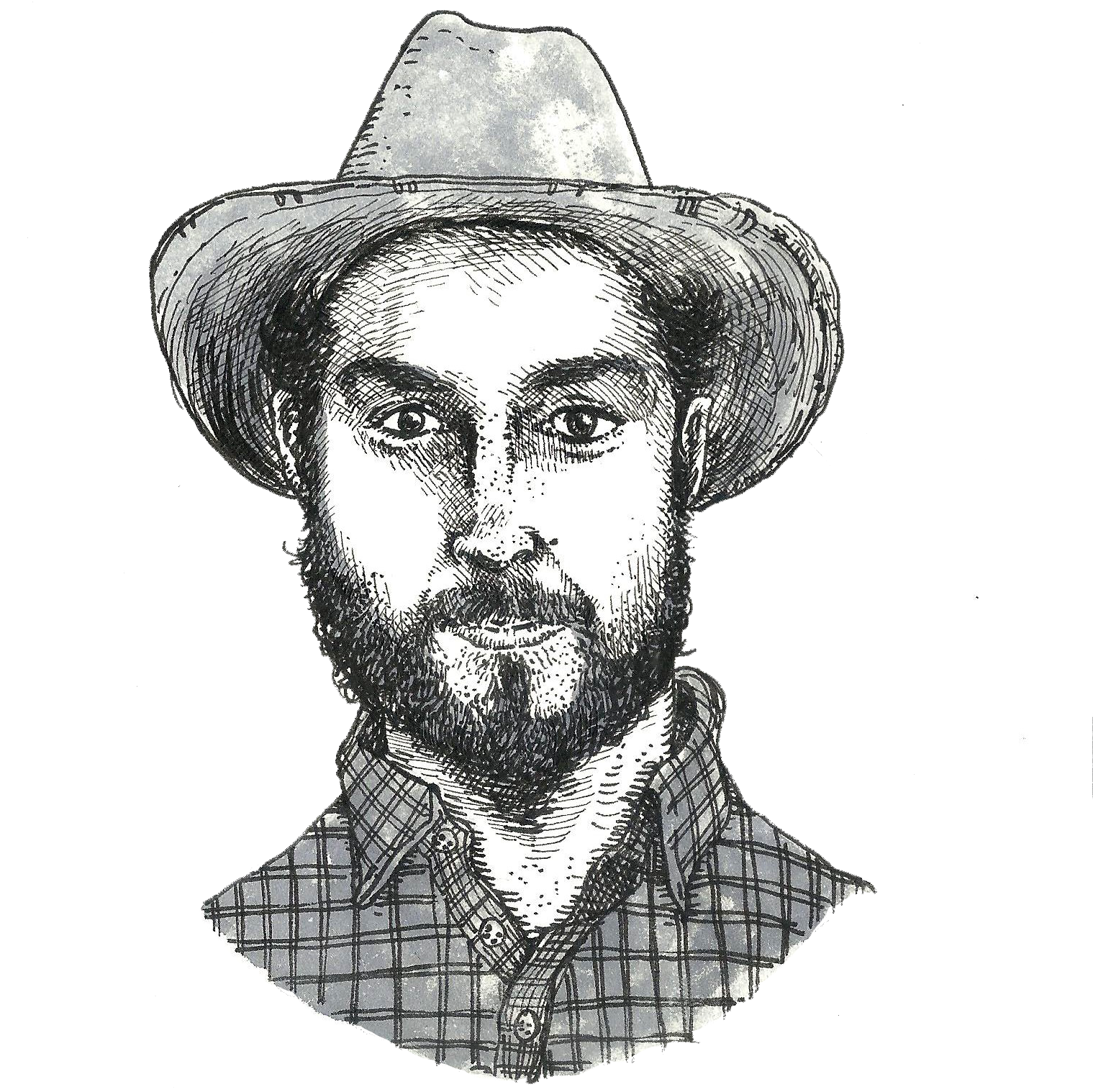 Robbie Brindley is a photographer from Hot Springs, Arkansas. Shooting mostly on film, many of Robbie’s photos capture the people of his hometown although his projects extend outside of that, including a series of dreamy polaroids of the New Mexico landscape and “Outskirts”, a documentary photo essay on the residents of Mountain Pine, Arkansas. He is currently working on a series of portraits of people from the Delta. You can and should check out his work here.

1. Do you actively do anything to keep your brain healthy, and if so what? I used to meditate and go for runs earlier in the year but that’s kind of dropped off here recently. I sort of got lost in some stuff. I should probably start again.
2. What or who mentally stimulates your growth the most? Probably just living in the south with my wife. I don’t think anywhere else would really do it for me.
3. If you could add or take away anything from your brain what would it be? I would take away all of the anxiety if I had a choice. I used to thrive on it, but here lately it’s more crippling than anything.

4. Are you more emotion or reason based when making decisions? Emotion based. All of my emotions are based off of reason though, even if it’s not logical.
5. In what situations have you learned the most about yourself? Sometimes my dreams will kind of bring up something I’m trying to ignore. I would have to say that anytime I’m out of my comfort zone I learn at least one thing I can apply to my life for a while.
6.Do you think you have to learn good judgement? (Are people inherently self destructive?) I’m not sure about other people, but it’s about half and half for me. My brain seems to always be going where I don’t want it to so I’m kind of having to learn how I can make good judgement while still living with my brain.
7. Do you have any daily or annual rituals? Are they personal to you or your family or are they related to your culture or religion? I drink coffee in the morning. I think most people do that though. I usually start working on a new photo series in the spring, after all the winter depression has taken it’s toll. That’s kind of a newer thing.
8. Are there particular books you find yourself buying for or lending to people close to you?
I’ll lend people art books or things like that. I don’t read a lot. My wife’s an English teacher though so she’s always kind of suggesting stuff. It’s mostly people lending me books and they never see them again.
9. Is it more important for you to speak or to be heard? I like to be heard, but a lot of what I’m saying probably never holds that much weight.
10. Do you think a time exists that is easiest to create? For instance, do you strike the muse or does the muse strike you? I’m always working in some form or another. I’m usually just tossing around ideas in the winter and playing with thoughts and ideas. Like I said, in the spring I always start a new project. I get a renewed sense of energy and optimism.
11. Do you have an emotional state that you find it easier to create in? It usually has to be right after something has been bothering me. If it’s too close then I get afraid to try new ideas. I have to be bothered by something, but I also have to be optimistic enough to do something about it.
12. Are there certain elements that you employ to set up the perfect mental space for creating?  I listen to a lot of music that has something to do with the Mississippi Delta. I realized I have to be in the South. I did a project in New Mexico a while back and now I totally hate it because I’m not familiar with that land at all. It feels super false and forced. I decided I’ll never do that to myself ever again.
13. Do you think you have to have an elevated ego to be an artist? I don’t think you have to have an elevated ego to create things. I guess it depends on how forceful people are about things. The only reason I try to put my stuff out is because it’s all I know how to do. I’m certainly not doing anything innovative or anything like that. I don’t think I’m a very strong photographer at all. I just don’t really have any other skills.

14. What smells do you most associate with your childhood? Pine and dirt.
15. If you could only live on five ingredients for the rest of the life, what would they be? I wouldn’t really care. Whatever someone is willing to let me have. I’m not picky.
16. Do you have spiritual needs and if so how do you nourish them? It comes and goes. I don’t really do anything specific.
17. Do you have a place you go to, either physically or mentally, where you feel the most at peace? Mentally I go to my childhood home. Physically I just stay at my current house.
18. Do you think that people need some form of discomfort to make art? Malaise is usually a part of what I do, but then again I’ve done things for no reason at all and I like some of that stuff more than a specific project.
19. Are you more motivated by the promise of reward or the threat of punishment? I’m motivated to just prove something to myself. Neither really.
20. How much does your conscience/morals come into play when making decisions? I’m really hard on myself, so they always play a part.
21. Do you ever experience your emotions in physical ways? If so, how? No. I never cry and I never shake from getting nervous.
22. What is your least favourite physical sensation? Right now I don’t really like anything that has to do with the dentist.
23. What is your favourite physical sensation? Who doesn’t love clean sheets?

24. Do you think a person has to understand art in order to be able to appreciate it? Not necessarily. Sometimes people just like colors or shapes. It’s all subjective.
25. Do you connect more to the lyrics or music in songs (assuming a song has both!)?
It depends on my mood. It’s hard to win me over. A good melody always gets me though.
26. What is your earliest memory? Getting on the school bus for the first time or finding out my uncle passed away. I can’t remember which came first.
27. If you got alzheimers or dementia what memory or memories would you be saddest to lose – or – which ones would cause the biggest loss of your personal identity? If I forgot my childhood or the time spent and things I’ve done with my wife. Those are the things that come to mind anyway.
28. Do you expect happiness in your life? I expect happiness to happen when it can.
29. Do you feel like falling in love is a spiritual or chemical process? I can’t really speculate on that. I just know it happens or it doesn’t. It doesn’t seem to have any real reason.
30.Do you try and avoid feeling negative emotions or do you feel it is more constructive to experience your emotions fully? These things depend. I used to be really good about that kind of stuff, but here lately I try to avoid things and it seems to just make it worse. It’s way more constructive to let my emotions take their toll though. I’m getting old enough to understand how that stuff affects my work.
31.What flaws do you think you have when it comes to communicating with other people?
I’m not really sure. I tend to beat around the bush when I should just tell the truth and get it off my chest. Then when it’s not important I can be completely honest even if it’s not necessary.
32.How do you deal with situations or individuals that fail to stimulate you creatively or emotionally? Do you avoid situations/have a set of tools in which to navigate them?
I don’t think there’s a single person in the world that couldn’t stimulate me creatively. Everyone has something to offer as far as I’m concerned.
33. What do you think your ex partners would say the hardest thing about loving you was?
I don’t have any.

34.Do you have any recurring dreams or nightmares? If so, what do you think they mean?
I’ve never really had recurring dreams. Just the same people in different situations. My dreams are mostly anxiety related. I’ll have dreams about running out of gas or locking my keys in my car. They’re really boring and not interesting at all.
35. If you have ever taken psychedelic drugs, did you have any interesting hallucinations on them? Do you feel changed from having taken them?
What are psychedelic drugs?
36. Do you find your mood affected by different colour palettes?
Maybe a little. I think blue is pretty. Desert colors set me at ease.
37.If you could live in a world where the aesthetic was controlled by a particular visual artist or film director, who would you choose?
Probably Mikael Kennedy. His real life and his photography is as close as it gets to a dream.
38. What’s the most unbelievable thing you’ve ever seen?
The moon rising over a mountain in the desert up near Taos, New Mexico. It sort of just looked like headlights in the trees across a lake. It came up so fast and the sky was so clear. I was convinced it was a UFO. My heart started racing and we were kind of confused. Then it was just the moon. I had never seen it move so fast. It really shook me.
39. Have you ever seen something which you feel has directly resulted in certain elements of your personality today?
When I first started going to shows to see bands and stuff. I didn’t realize you could be weird and careless and still survive. I had never considered deciding things for myself until those times.
40.Would you rather lose your sight or your hearing?
I would rather lose my hearing. I like looking around at stuff.
41. Do you feel like you surround yourself with the people who see you for who you really are?
They probably understand me to a certain extent. It’s pretty easy to be strangers with people you’re really close to though.